"You could always tell what kind of a person a man thinks you are by the earrings he gives you. I must say, the mind reels." - Audrey Hepburn, Breakfast at Tiffany's

If you consider yourself the queen of fashion and you haven't seen Breakfast at Tiffany's, we might need to relinquish your crown. Since its release in 1961, Holly Golightly—an eccentric New York City party girl—has been inspiring fashion editors, designers, housewives, and women who dream of living in NYC.

The film begins at dawn with a taxi stopping in front of Tiffany's on 5th Avenue. An elegant woman in a black sheath dress and elbow-length opera gloves steps out. With a croissant in one hand and a coffee in the other, she makes her way towards Tiffany & Co. where she dreamingly gazes into the window and stares at the jewelry. As she sips on her coffee, Henry Mancini's Moon River plays in the background...and just like that a style icon was born.

JUST CRAZY ABOUT TIFFANY'S & THE LBD

Audrey Hepburn's character defined the style revolution of the 1960's...and brought Tiffany's onto the big screen. Hubert de Givenchy (yes, that Givenchy) and costume designer Edith Head joined forces to the create  looks featured in the movie. Inspired by Coco Chanel's elegant concept of the little black dress, Givenchy designed a version that was tailor-made for Holly Golightly. This sleeveless, floor-length sheath dress featured a bateau neckline, demi-lune cutouts, and a thigh-high slit. When it was paired with over-the-top jewels, elbow-length gloves and a tiara, it became one of the fashion industry's most iconic looks...and the reason why the little black dress is a wardrobe staple found in the closets of women today.

While Holly Golightly's iconic LBD has inspired going-out outfits and glam Halloween costumes for decades, Edith Head and Hubert de Givenchy created even more timeless and completely memorable looks. One of my favorites was when she stepped outside of her apartment to see her neighbor (and love interest, Paul) chatting with his sugar momma. She was wearing another LBD that was flared at the hem, and paired it with this AMAZING wide-brim hat with a white scarf, Chanel earrings and the most chic sunglasses ever.

Another one of the less popular, but equally incredible looks was the sleeveless, embellished hot pink dress and matching tiara she wore to the party with the Brazilian. No matter which ensemble is your favorite, we can all agree Breakfast at Tiffany's was one of the most influential movies for fashion and beauty ever created!

Want to emulate Holly Golightly's style? Check out what we've got in store.

Shop all Breakfast at Tiffany's looks at LePrix. 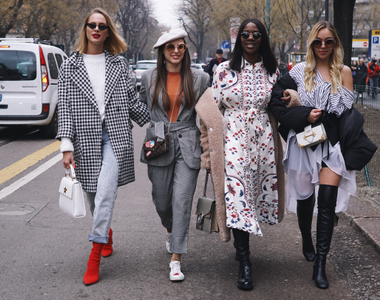 Industry + Insights The Latest Style The Guide / Jan 24, 2021
Gucci, Prada, Bottega & Chanel: Top Designer Bags For 2021
Hey, fellow bagaholics! Let’s forget all about our concerns for a few minutes and discuss the top designer handbags and trends for 2021.

Industry + Insights The Latest The Guide / Jan 14, 2021
Updated: Chanel Just Increased Their Prices Again
Hot on the designer heels of Louis Vuitton’s price increase, there’s a rumor going around the fashion world that Chanel will be bumping up thei

Industry + Insights The Latest / Jan 08, 2021
Breakings News: Louis Vuitton's 2021 Price Increase
In the spirit of 2020—oh wait, it’s 2021—we have some not-so-great news for you. While it’s not doom and gloom like the mutant COVID strain
Copyright © 2021 LePrix, Inc. All Rights Reserved.
Back to Top